Whether you are looking for a statement piece of art or something for that empty space on your wall, our Hertfordshire art gallery is bursting with beautiful artworks to suit all interiors and budgets.

From traditional to contemporary, paintings to sculpture, a wide choice of art awaits you including the world famous Frogman bronze collection.

Set in a Grade II listed building in Kings Langley, our art gallery offers a unique personal service in a relaxed and friendly environment. With complimentary home viewings, art consultations and zero % finance, our excellent service makes choosing art for your home or business stress-free and enjoyable. 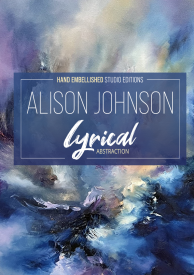 Alison Johnson has been a time-honoured favourite for several years with her atmospheric compositions that capture the power of light. The latest collection of Studio Editions by Alison are undoubtedly her strongest pieces to date.

'Lyrical Abstraction' is comprised of four artworks where Alison explores a world of negative space, tonal values, and compositional concepts.

Employing the classic emotional language of abstract that characterises her style, Alison has made a compositional departure in these new works to embark on a journey that has led her to increased structure and geometric ambiguity. These aspects in her work are familiar yet unfamiliar, and here they are given greater conceptual freedom than in her archetypal works.

Secure or arrange a viewing on your favourite piece(s) by contacting the gallery: 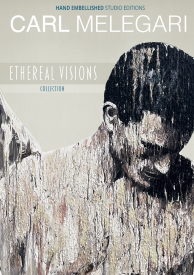 The angels have landed. Announcing Carl Melagari as the latest addition to our portfolio of artists and his stunning debut studio edition collection 'Ethereal Visions.'

Carl Melegari’s contemporary approach to painting explores the human form, primarily focusing on the semi-abstraction of the figure and the versatility of oil paint to create them.
Often working from life and models, Carl explores how the physicality of the paint combined with the density of pigment can give a sense of life radiating from the canvas, as if to evoke the vigour of the human form. His approach to painting explores the treatment and handling of paint whilst conveying expressionistic, ethereal figures. His paintings arguably focus as much on the medium of paint and how it reacts with the surface, as they do on the subject matter of the piece.

Perhaps the canvas equivalent of Michelangelo's infamous quote "I saw the angel in the marble and carved until I set him free," Melegari undertakes an approach of continuously accumulating and scraping back the paint until a figure emerges.

His work draws from sculptural influences, such as American sculptor Manuel Neri, as well as from colourists, such as Italian painter Giorgio Morandi.

Carl frequently uses a monochromatic palette to generate the idea that he is playing with the reduction of form, often abstracting and delineating parts to create a more non-figurative feel. He often uses this muted palette to replicate a sense of isolation and seclusion. He then applies paint liberally and without reserve: allowing it to drip spontaneously to both literally and symbolically mirror the personality of the sitter.

Order your favourite by contacting the gallery: 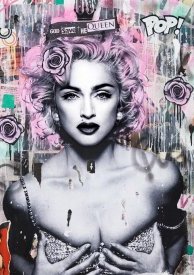 These mixed media collages draw upon inspiration from the artist’s background in music. Having witnessed the fast paced and energetic lifestyle that accompany fame and success, from the almighty highs to the lows

The Twisted Icons collection feature a hero shot of an iconic artist at the pinnacle of their heyday. This portrait is set amongst a mixed media medium that blends graffiti, collage and paint that charters the journey of their life. A full immersion into their life and careers his noted through details including album artwork and torn press clippings accentuated with spray paint, acrylic, pen and gold leaf on occasion.

Each piece of work is often fuelled by a troubled soul at war with inner demons. Addiction, money, power, fame and the impact they have form part of the content inspiration for each subject.

It’s not uncommon to see Add Subtract pieces feature a yellow halo to represent that despite everything endured there is a soul at the core of us all, finally often a “hello my name is sticker” reminds us we are all just people, just a face with a name.

To secure your artwork please contact the gallery on:

Sign up for Montague's Gallery newsletters and email updates

Appointments can be booked outside of gallery hours